Even though it happened over twenty-two years ago, I remember finding the butterfly like it was only yesterday. Unlike most skipper butterflies in the understory of the Brazilian rainforest, which dart off- out of sight- upon being disturbed, this skipper flew just a few meters and settled along the side of the trail, on the underside of a leaf. As I slowly and quietly approached, I noticed its distinctive rusty coloration and tiny metallic grayish spots on the underside of the hindwings. Little did I know how long the journey ahead would be- the quest to determine what I had just found…

The unique ‘rusty skipper’ found in August, 1993, in Rondonia, Brazil

This was my first trip to South America, which hosts the world’s richest fauna of skipper butterflies. I chose the Fazenda Rancho Grande in Brazil’s Rôndonia State, since it was the site of a long-running inventory of butterfly species, led by George Austin and Tom Emmel. Researchers had been studying this site for many years by the time I arrived in 1993, and an extensive list of species had already been accumulated. As a nineteen-year-old self-declared skipper nut, my excitement level was over-the-top every day of the two-week expedition, as I encountered skippers I had long dreamed of finding.

Each evening George would review the specimens we caught, making determinations when possible and taking notes on new species for the study area. When George saw my rusty skipper, he took a second and third look, and said he didn’t know offhand what it was- he asked me to send it to him after it was spread for closer study. I didn’t think much more about it during the rest of the trip.

As promised, a few weeks after returning home from the expedition, and after spreading some of the more unusual specimens, I sent the rusty skipper, together with a few other specimens for determination, to George. After a week or so, George replied that the rusty skipper “is new”, but he did not elaborate. I suspected that George had many specimens of this species and was planning to name it in one of his upcoming papers. It was exciting to think that a specimen from my first trip to South America would be important for George’s research!

Then the years passed. George and I collaborated on many skipper papers, describing various new species and genera together, but the rusty skipper never came up in our letters back and forth; while neither of us had forgotten about it, it just never reached the front burner; or perhaps, George wasn’t quite sure where he had put it?

In 2006, I arrived at the McGuire Center for Lepidoptera and Biodiversity as a postdoc, where George had been working as the Senior Collections Manager since the Center opened in 2004. Finally working together under the same roof, we cranked out several papers between then and George’s untimely passing in June, 2009. Being George’s closest collaborator at the McGuire Center, it was left to me to clean out his office and make sense of his research specimens after his passing. During the process of organizing and labeling George’s specimens, late one November afternoon, I found my rusty skipper!

As it turns out, George never accumulated any other examples of this skipper. After dozens of trips to Rôndonia, and after reviewing thousands of skipper specimens collected by many dozens of researchers who visited the site, no additional specimens of the rusty skipper ever surfaced. Sixteen years had passed yet no other specimens had been found- from anywhere!

At about the same time in 2009, a skipper researcher from the Smithsonian Institution published a paper on the genus Telles, which he placed into synonymy with the genus Thracides. One species of Telles, however, the rare Telles pyrex, did not follow the other Telles species into Thracides, and was left hanging in nomenclatural limbo, “incertae sedis”, without any genus-level association. At the time, pyrex was known from just two female specimens, complicating efforts to find a genus-level home for it. Without knowledge of the male anatomy, it was nearly impossible to determine which skippers it may be closely related to.

I found a third female specimen of pyrex among George’s study specimens from Rôndonia, which George had not determined to species. While larger than my rusty skipper, and with different forewing markings, and a mostly bright yellowish ventral hindwing, elements of the forewing spot pattern, and the rusty ventral forewing coloration, suggested that my rusty skipper just might be the male of pyrex. If so, pyrex would be sexually dimorphic- with considerably different looking males and females.

During late 2013, my Brazilian colleague Diego Dolibaina spent several months researching skippers at the McGuire Center. At the time I presented him with the female pyrex and the male rusty skipper, and proposed the hypothesis that they might be male and female of the same species. He studied the anatomy, external and internal, of both specimens, and agreed that they likely were conspecific. But we couldn’t be 100% sure from anatomical studies alone.

So in 2014, we removed a single leg from each specimen- the female pyrex and the male rusty skipper- for DNA extraction and sequencing. By studying the “barcode segment” of the COI gene, we were finally able to confirm not only that the rusty skipper is indeed the male of pyrex, but also that pyrex required a new genus name!

So after 22 years, here it is- the description of a new genus- Pseudorphe– for pyrex, along with the first description of its male. To date, this male pyrex– my rusty skipper from 1993- remains the only known male of the species! 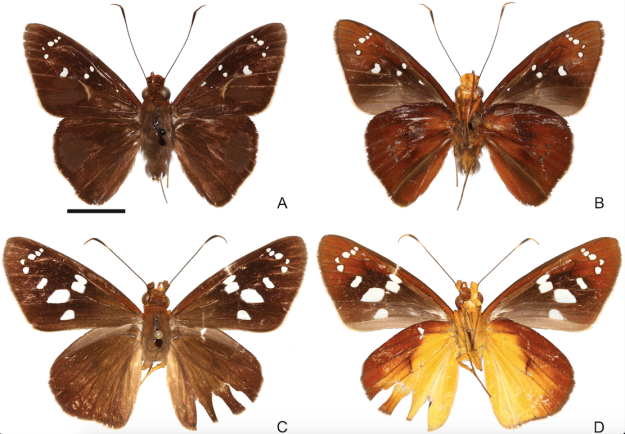