Most people don’t notice skipper butterflies. There are a few large, brightly marked skippers that people do sometimes see, but the great majority of skippers are small to tiny, orange, brown or black, and they generally fly very, very fast. When skippers do get noticed, they are often dismissed as ‘moths’.

Yet there are a few dedicated folks out there who go out of their way to notice skippers. Harold Greeney is one of them. Harold is the owner of the Yanayacu Biological Station in Cosanga, Ecuador, situated on the eastern slopes of the Ecuadorian Andes, which is a very good place if you like skippers. Harold has encountered many unique skippers over the years in the tropical forests near his station, some of which have proven to be new species to science.

Artines steinhauseri was named as a new species in 2015 from 5 specimens from Ecuador. One of them, shown above, was photographed alive by Harold Greeney.

Harold found an extraordinarily unique skipper on 17 June, 2004, along the Cosanga River east of the Yanayacu Biological Station. It is brown above and mostly rust-colored below, with a unusual pattern of metallic bands and spots on the ventral hindwing.  This small skipper, which I immediately recognized as unique once Harold passed it my way, evaded careful study until June, 2016, when my colleagues and fellow skipper aficionados Eduardo Carneiro and Diego Dolibaina, from Brazil’s Federal University of Paraná, visited me to geek out over skippers for a week. None of us could place Harold’s unique skipper to genus based on its wing markings alone, so Eduardo dissected the genitalia (this is standard practice in such instances). Upon seeing the general form of the genitalia, it was immediately clear that this unusual skipper represented a species of Wahydra, and there were no known species of Wahydra that look much like this one!

Upperside (left) and underside (right) of the unique male specimen of Wahydra graslieae.

Wahydra are small skippers, grading from orange to dark brown, which inhabit the Andes Mountains of South America from Venezuela to Argentina. They are very rarely encountered in nature, since they fly only in warm or sunny weather yet they inhabit high-elevation habitats where cool, cloudy weather conditions are the norm. The genus Wahydra was named in 1991 by Stephen Steinhauser, and is a meaningless anagram of the name (Kenneth John) Hawyard, a prominent skipper researcher who was based in Argentina and first suggested that a new genus was required for the species now placed in Wahydra. In 1991, nine species were included in Wahydra, and five new Wahydra species have been described since. There are undoubtedly additional Wahydra species yet to be discovered in poorly studied parts of the Andes.

Specimens of Wahydra vola, and their associated data labels, as figured on the Butterflies of America website. Most Wahydra species are similar to W. vola in size, shape, and coloration.

The evening we determined that this spectacular skipper is a new species of Wahydra, Eduardo, Diego and I happened to be watching episodes of The Brain Scoop, starting with “What is a Species”, and followed by “The Taxonomy of Candy”. Upon browsing the whole list of Brain Scoop videos, we were so impressed by how many of them promote the importance natural history collections, that the idea to name this new Wahydra for Emily Graslie was born. Today, with the publication of the original description of Wahydra graslieae, the fifteenth known species of Wahydra is unveiled.

Many questions remain about Wahydra graslieae. What does the female look like? What’s its overall distribution? What are the caterpillar foodplants? What do adults feed on? How does it relate to other species of Wahydra? We’re going to need a lot more people paying careful attention to skippers in Ecuador, along with a good bit of luck, before we can have answers to these questions. 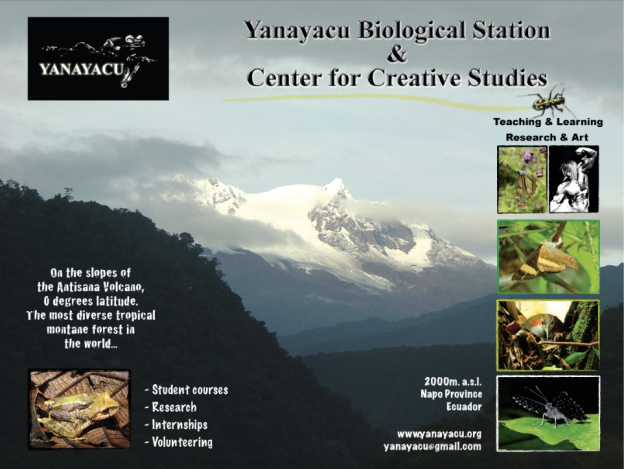