Like so many stories about insects, this adventure begins with a plant.  A really cool plant!  Florida Rosemary (Ceratiola ericoides) is endemic to Florida and adjacent states, and is an indicator of sand ridge and dune habitats.  This is what a pristine sand ridge habitat in peninsular Florida looks like- complete with Florida Rosemary bushes: 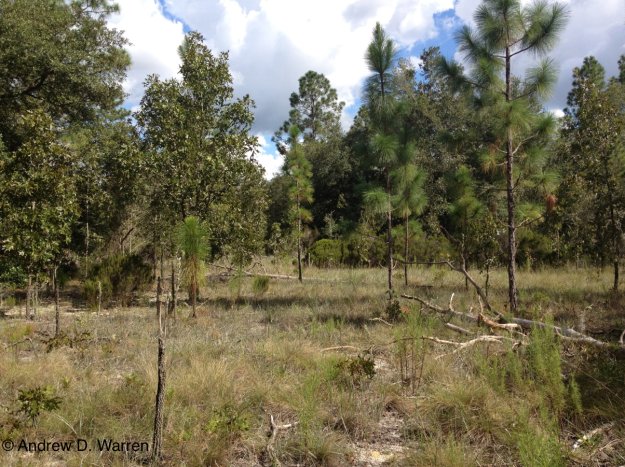 Despite its common name and appearance, Florida Rosemary is not related to culinary Rosemary (Rosmerinus officinalis), but for one particular grasshopper, it is just as tasty.

Florida Rosemary produces fresh vegetation throughout much of the summer and fall, providing a unique resource for a unique grasshopper.  Would you believe there are grasshoppers hiding deep within these bushes?  Big grasshoppers!

This grasshopper felt very much at home within the rosemary bush, and was reluctant to move when disturbed.  I was able to part the rosemary branches to get a better view, and could even touch the grasshopper (it crawled onto my finger at one point)- at most it would jump to a nearby branch.  Thus, we had several minutes together, as I attempted to photograph her in detail.  I enjoyed watching her move, so very slowly, along the rosemary branches.  Every time I took my eyes off of her, I literally lost her and had to make her jump to see her again!

Eye-to-eye with a Florida Rosemary grasshopper

Despite its long wings and strong flight, the Rosemary Grasshopper is extremely sedentary, and pretty much refuses to leave its rosemary bushes during daylight hours.

Side view of Rosemary Grasshopper, deep within a Florida Rosemary bush

After this chance encounter, I spent much of the rest of the afternoon searching nearby rosemary bushes for more grasshoppers.  Five or six times I thought I saw one deep within a bush, but each time was a false alarm.  For this large grasshopper to have hidden from science until 1928 at first seems remarkable, but after an afternoon observing one within a rosemary bush, I can understand why!  The Rosemary Grasshopper is an incredible master of camouflage!  It is also an incredibly unique part of a special, endangered Florida habitat.  I’m so happy to have finally found one!